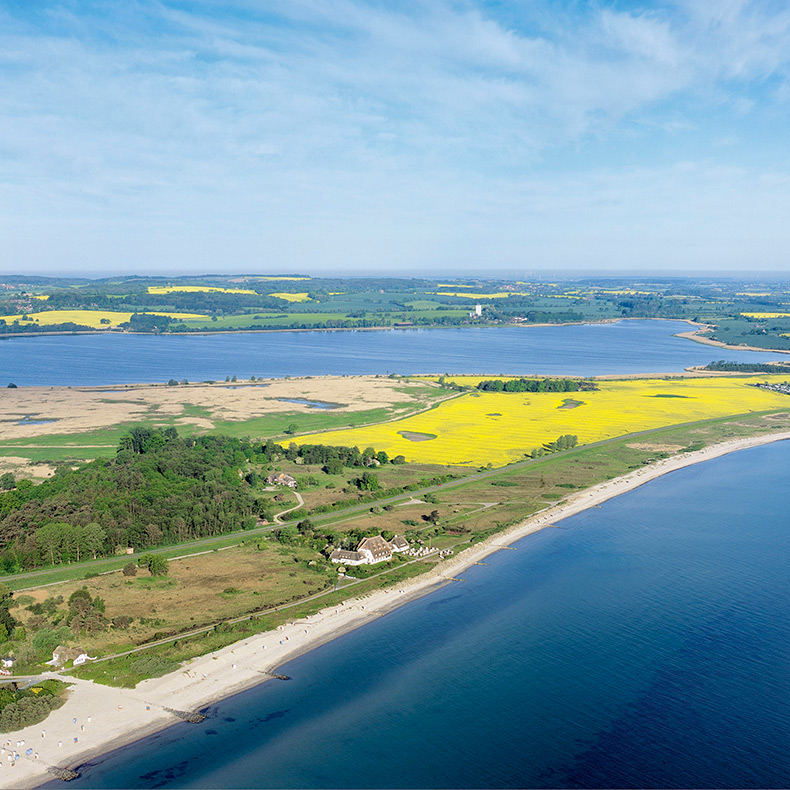 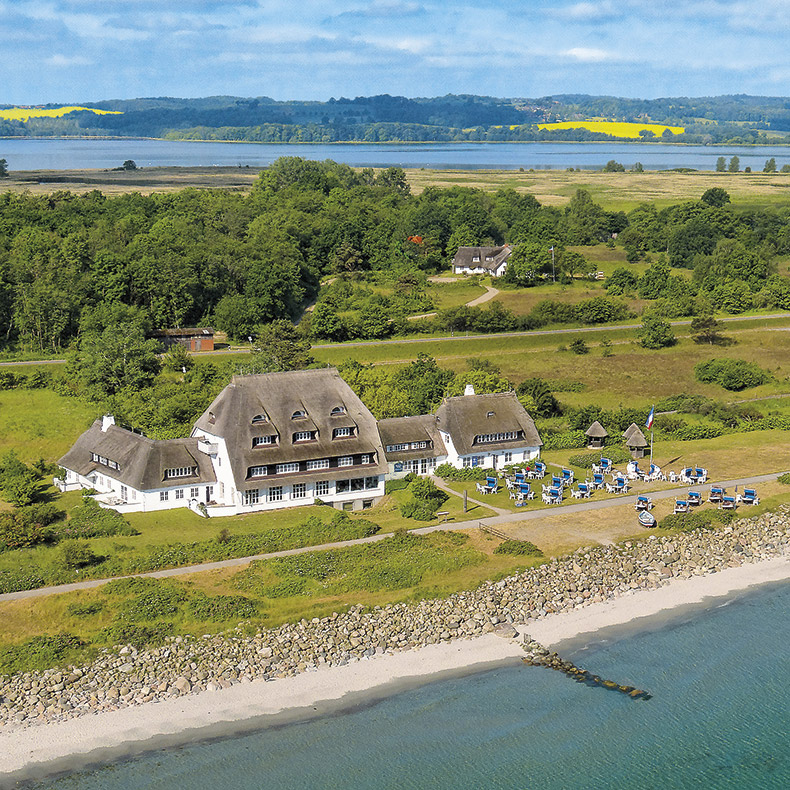 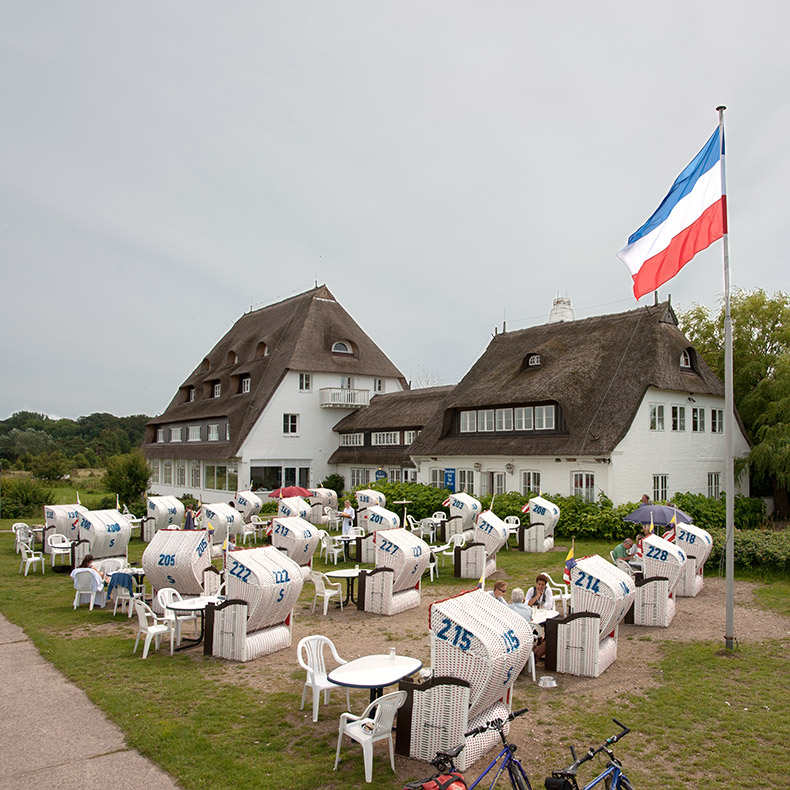 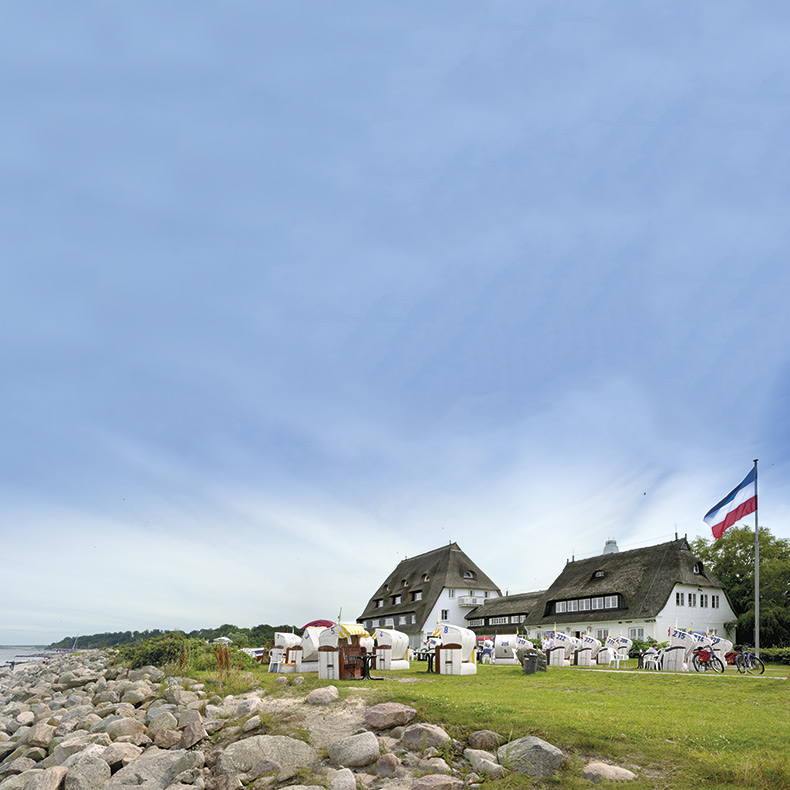 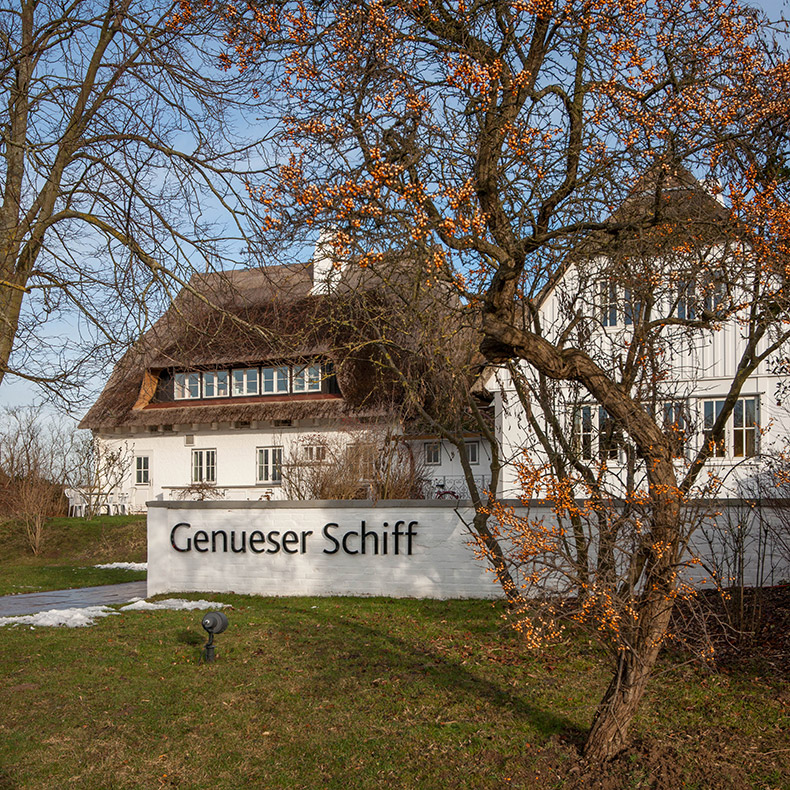 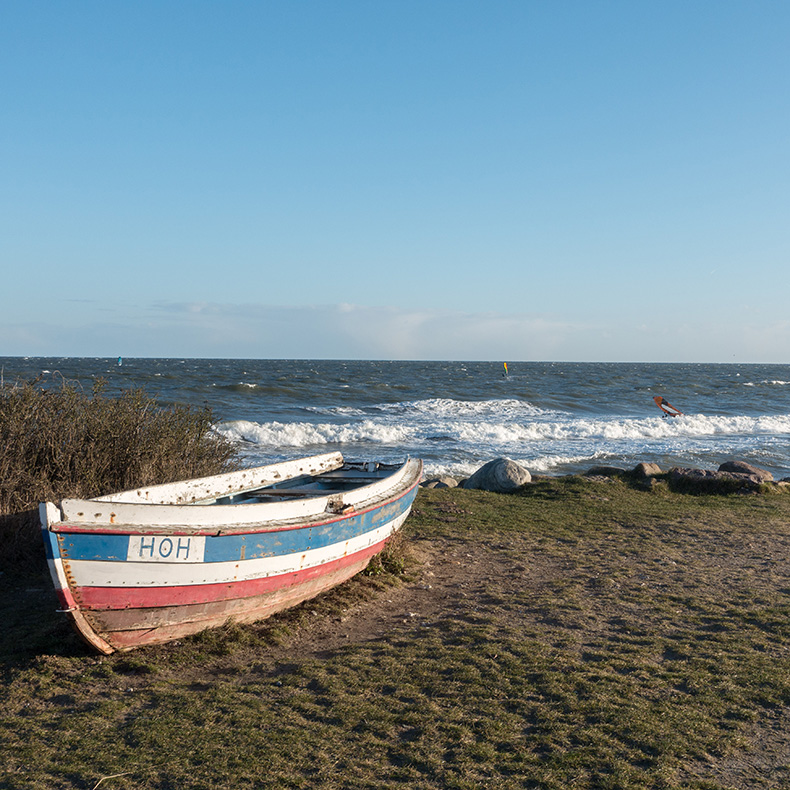 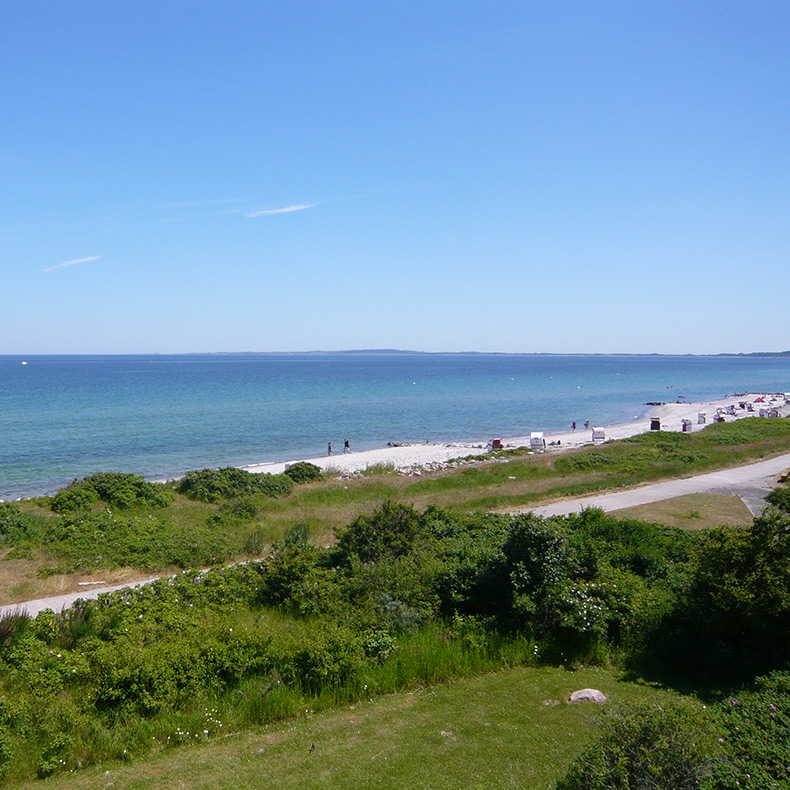 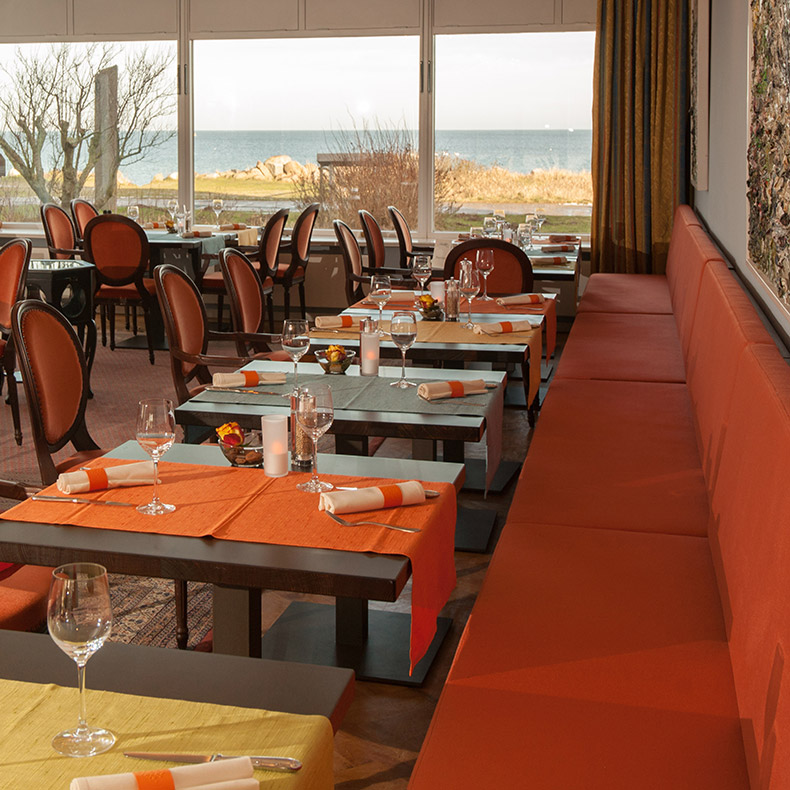 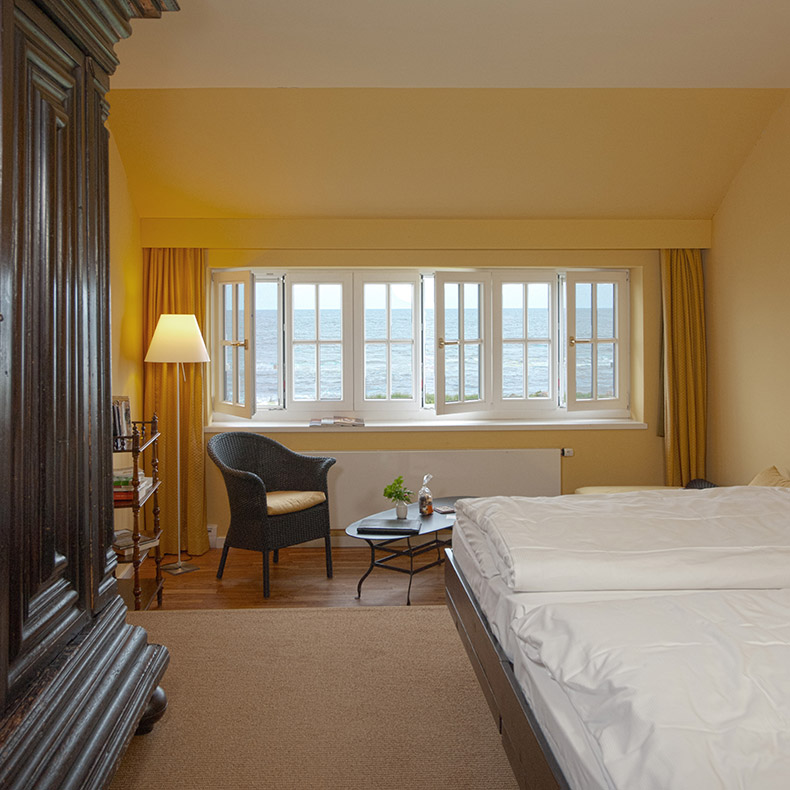 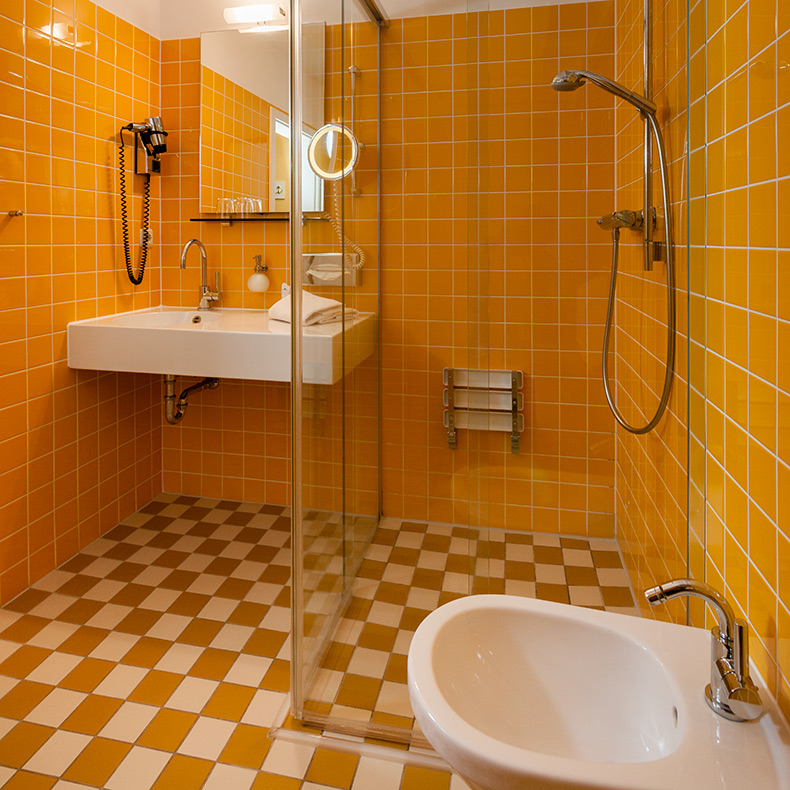 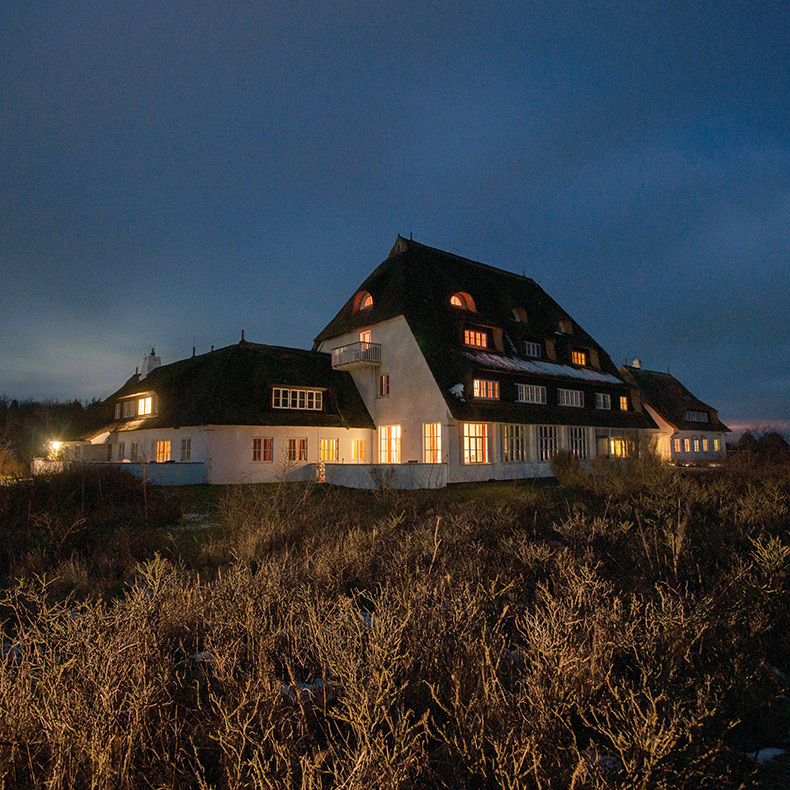 Hohwacht is a charming village on the Baltic Sea located 90 minutes' drive from Hamburg. It is nestled in Schleswig-Holstein's loveliest landscape, with rolling hills, green pastures and endless fields of rapeseed. The main building is the thatched Genueser Schiff, located directly on the beach with its fresh sea air and the gentle sound of the waves. Treat yourself to breakfast in a wicker beach chair while you watch the fishing boats sail by and listen to the seagulls squawk. Just three hundred meters away behind the dyke lies the Genueser Country House in the middle of its own nature reserve, surrounded by old fruit trees and the resounding silence of the Baltic night. The moon shines bright and clear while the stars sparkle ...
Video > 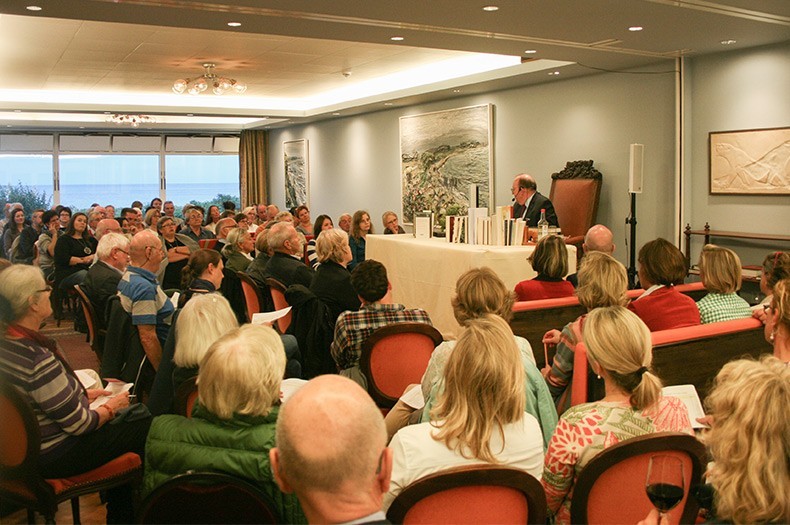 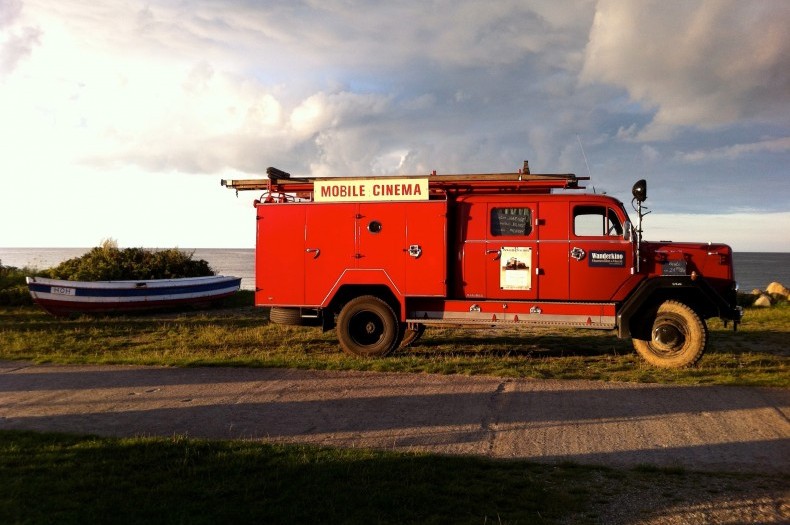 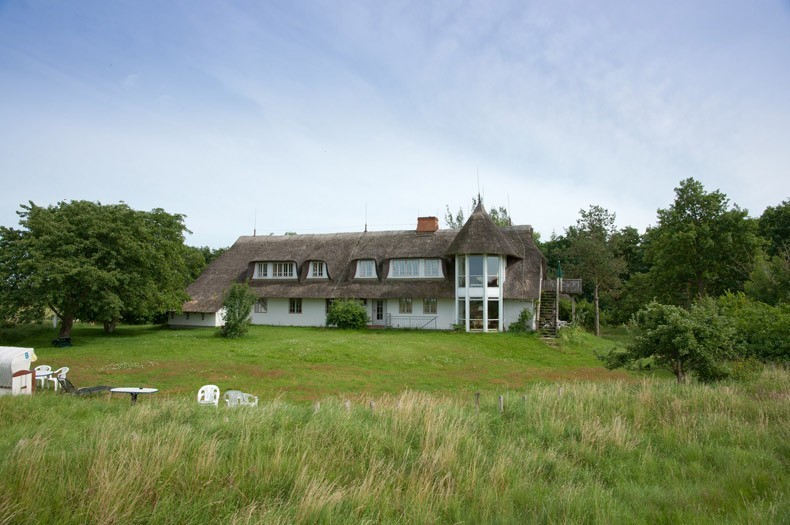 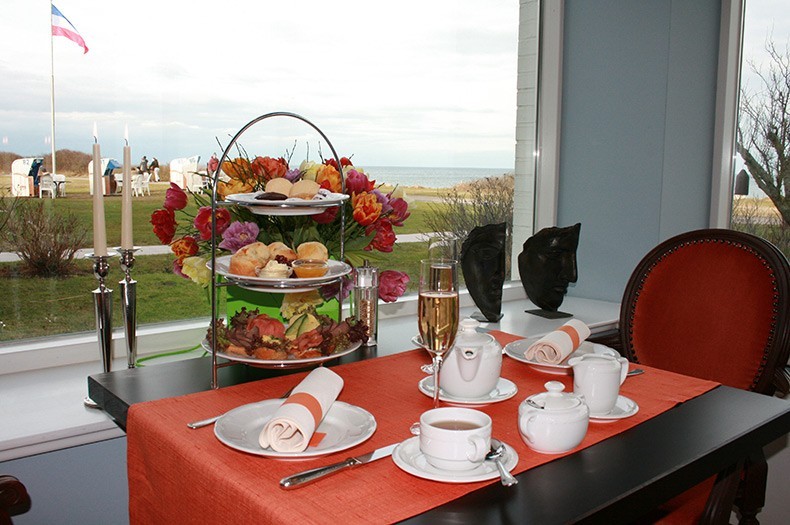 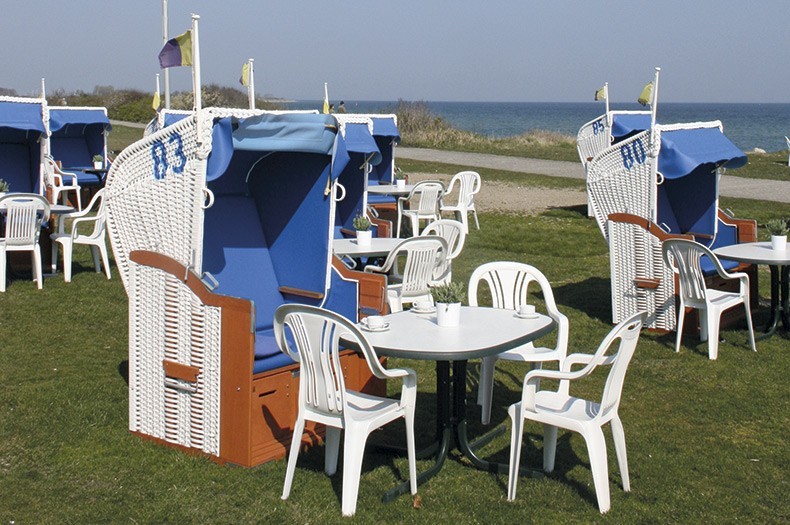 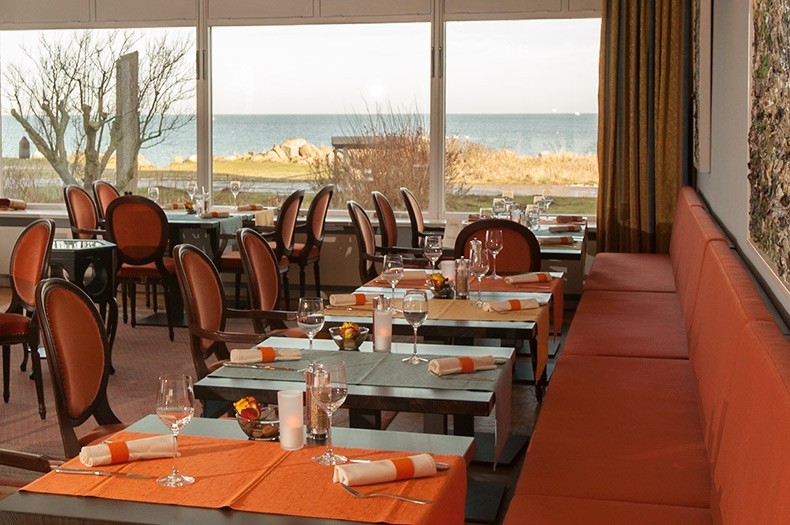 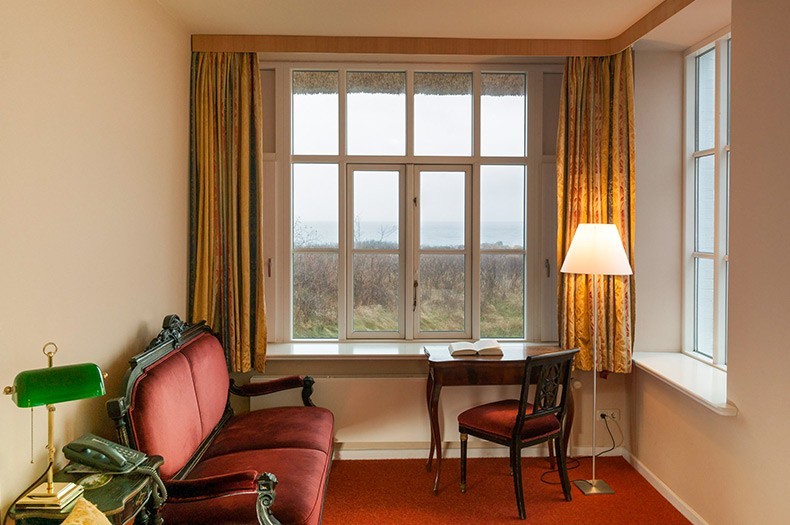 If you would like to surprise someone with a special gift, we recommend one of our exclusive vouchers, which you can exchange for:

A Lazy Day in a Wicker Beach Chair

Art at the Genueser Schiff 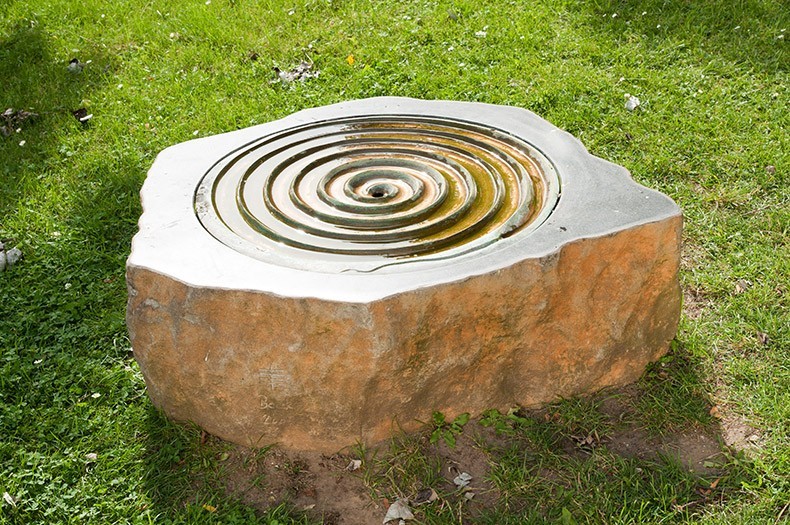 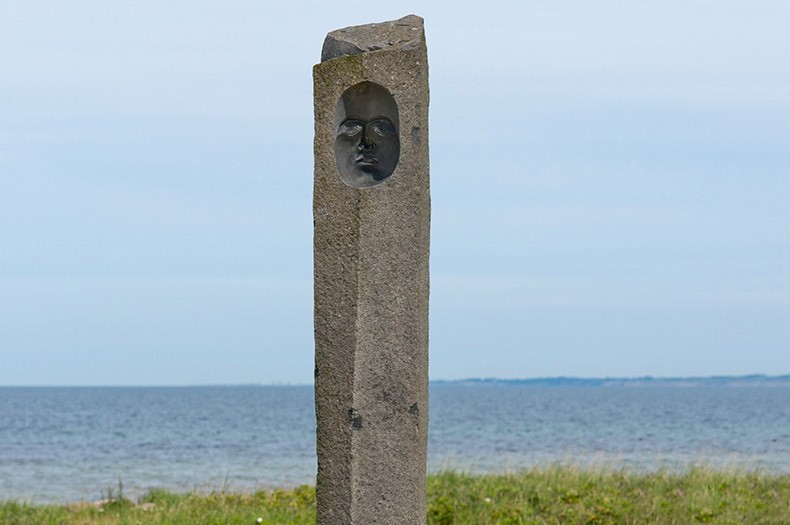 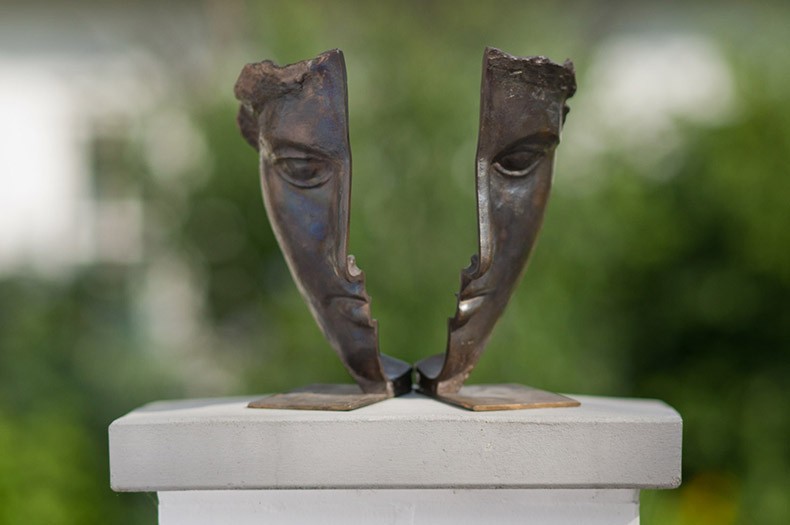 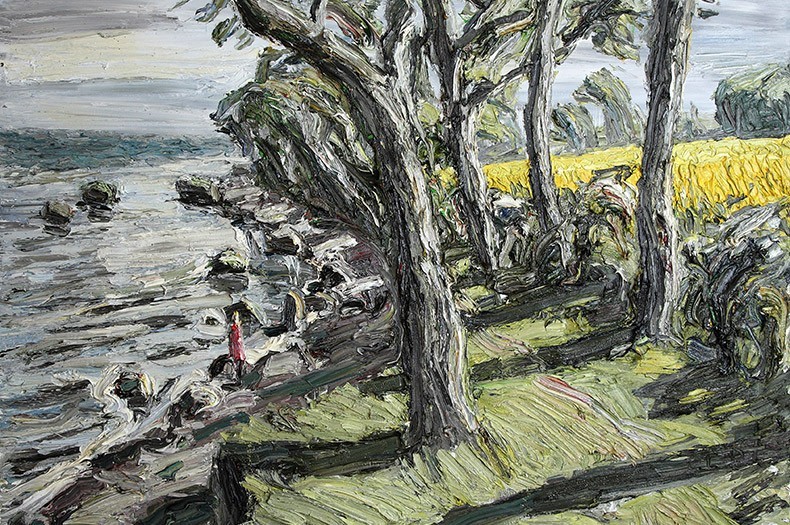 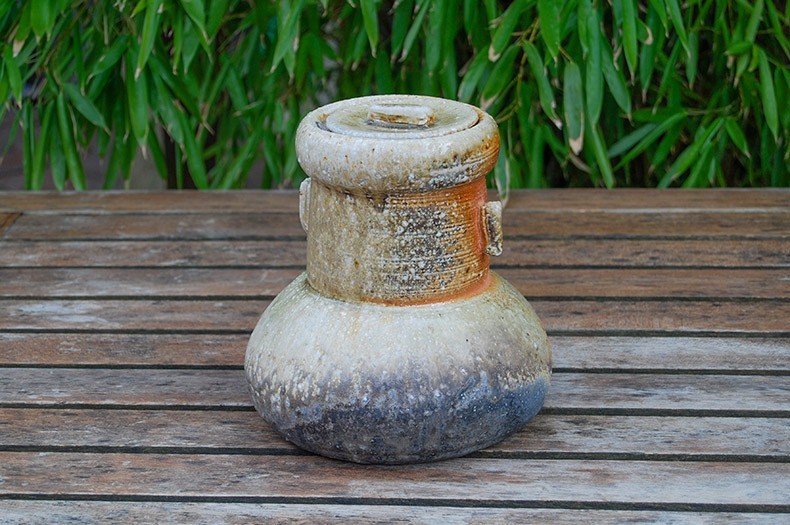 Art alarm!
We love art. This is probably because in art anything goes, and we have always been proud of being a bit different from the rest. You will find art in the main building, in the guest rooms, in the garden and along the promenade. Our Artists include:

Fritz Baack
There is a basalt pillar on the seaward side of the Genueser Schiff next to a water feature (very popular with children) and a bust of Janus in the restaurant on the first floor
www.fritz-baack.com

Michael Ryan
His works are on display in various rooms
www.mryan.nl 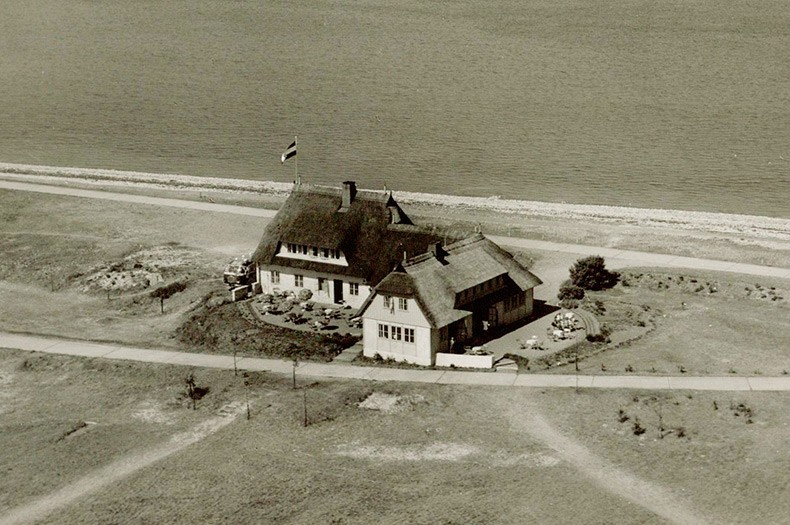 How it all began
The land surrounding the Genueser Schiff has been family owned for generations, but the former hunting grounds only became suitable for building after they were enclosed by dykes following the legendary storm flood of 1872. The hotel itself was built later.

The hotel was founded by Countess Waldersee, who named it after a line in the poem ‘Toward New Seas’ ('Nach neuen Meeren') by Friedrich Nietzsche. Her son. Philipp Brandt, added the second verse to the poem when he took over the hotel: